President of India, Shri Ram Nath Kovind, S.A. Accepting the recommendation made by Bobde, Justice N.V. Raman has been appointed as the 48th Chief Justice of India. Justice Raman’s term will be till August 26, 2022. Prior to his elevation to the Supreme Court on February 17, 2014, Justice Raman was the Chief Justice of the Delhi High Court. 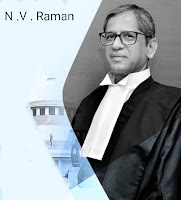 Justice N.V. Raman (Nootalapathy Venkataraman) is currently the judge of the Supreme Court. He has been working in the Supreme Court for 8 years. He will take over as the Chief Justice of India on 24 April 2021.
NV Raman was born on 27 August 1957 in Andhra Pradesh. As a student, he fought for civil liberties during the Emergency in 1975. He was enrolled as a lawyer on 10 February 1983. He became the permanent judge of the Andhra Pradesh High Court on 27 June 2000. On 2 September 2013, he was appointed as the Chief Justice of the Delhi High Court. On February 17, 2014, he became a judge of the Supreme Court.
for more 👇

Home        About us     Contact Us Health Ministry launches ‘Diet Revolution’ mission  Knowledge Bouquet The Union Health Minister, Dr. Harsh Vardhan has launched a comprehensive campaign, Aahaar Kranti, dedicated to spreading awareness about nutrition. This has been done with the aim of solving such a challenge related to India and the world, the peculiar […]